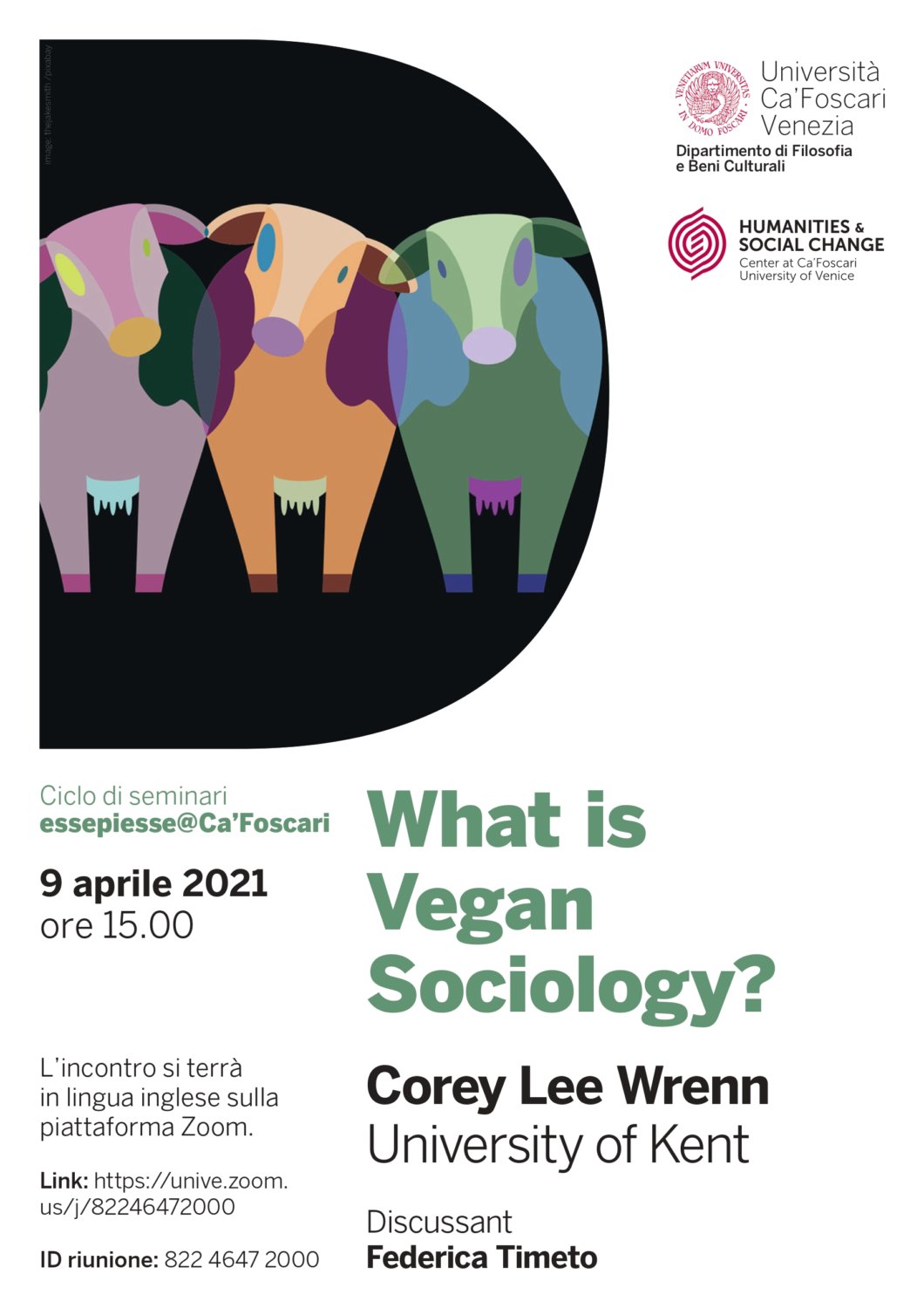 What is Vegan Sociology?

Dr. Wrenn is Lecturer of Sociology with the School of Social Policy, Sociology and Social Research at the University of Kent and co-director of the Centre for the Study of Social and Political Movements. She served as council member with the American Sociological Association’s Animals & Society section (2013-2016), was elected Chair in 2018, and is co-founder of the International Association of Vegan Sociologists. She serves as Book Review Editor to Society & Animals and is a member of The Vegan Society’s Research Advisory Committee. Dr. Wrenn has been published in several peer-reviewed academic journals including the Journal of Gender Studies, Feminist Media Studies, Environmental Values, Disability & Society, Food, Culture & Society, and Society & Animals. In July 2013, she founded the Vegan Feminist Network, an academic-activist project engaging intersectional social justice praxis. She is the author of A Rational Approach to Animal Rights: Extensions in Abolitionist Theory (Palgrave MacMillan 2016), Piecemeal Protest: Animal Rights in the Age of Nonprofits (University of Michigan Press 2019), and Animals in Irish Society (SUNY Press 2021).

What is Vegan Sociology?
Veganism is an ethical philosophy and political practice formed in the 19th century, substantiated in the 20th century, and popularized in the 21st century. Today, between one and five percent of national populaces in the developed world identify as vegan (although distinct in practice and purpose from the Western vegan philosophy, much larger proportions of developing populations have traditionally relied on plant-based diets). In January 2021 at the height of COVID-19, a record 500,000 pledgers across the globe signed up for the Veganuary 30 day transition program, an increase of 100,000 from the year prior (other vegan charities with competing programs reported impressive registrations as well). The rising popularity of veganism certainly indicates the resonance of a revolutionary lifestyle more than a century in the works.

On the verge of a cultural tipping point, veganism is poised to fundamentally reimagine and remodel humanity’s material relationship with food, the environment, and other animals. Although rooted in animal rights, veganism attends to environmental integrity and human flourishing as well, subjects that fit more securely within the jurisdiction of sociology. Indeed, there is considerable overlap with numerous sociological areas of inquiry, but the discipline has remained conspicuously silent on veganism until only recently.

The emergence of vegan sociology over the past decade can be attributed in part to its strained alliance with “Animals and Society,” an officially recognized sociological subdiscipline which has itself only been crystalizing since the turn of the 21st century. A number of vegan scholars have found it difficult to align their liberationist work with the anthropocentric vein that predominates in its progenitor. For that matter, their preoccupation with large-scale and increasingly global crises (climate change, pandemics, chronic diet- and lifestyle-related illnesses, and nonhuman suffering in ever-expanding agricultural systems) indicates that vegan sociology is operating within an altogether more critical (and novel) theoretical and empirical framework.
More than seeking to simply understand the relationship between humans and other animals, vegan sociology fundamentally troubles human dominance and aims to address some of the most pressing social problems facing society today.

This event is in English